Daughter4254 used to think life in a community where art, music and names are outlawed would suffocate her creative spirit. Now that she’s rotting in a prison cell, she’s not sure her dying mother made the right choice when she entrusted her with the secrets of rebellion. Prison has given her plenty of time to relive every mistake and lose all hope.

Then she meets Thomas, a fellow inmate, who tells her stories of the mythical mountain colonies where people have names and the arts thrive. Together they plot an escape, knowing if they fail, they will die. Or worse, their consciousness will be taken by the MindWipe, leaving their bodies free for the government to use. When nothing goes as planned, Daughter4254 must choose between using her mother’s secret to better the world she hates, or following Thomas to the quiet life of freedom she has always craved.
********************
Review:
My rating (out of 5 stars): 5 stars
The only way to describe this book is intriguing dystopian. The first thing that popped into my head while reading this book is The Giver. The Giver is an amazing remarkable dystopian novel and this book is very similar to it. However, despite their similarities the author manages to make it unique. To make it truly her own. That's not a super easy thing to do; yet the author pulls it off perfectly. I might even go as far to say that this book is just as, if not more so, amazing as The Giver.
One thing that I felt made this book unique, not just from The Giver but every other book I've read, is the relationships. Specifically between the main character, Daughter4254, and her older brother. I'll be the first to admit, I'm a sucker for overprotective older brother characters, they're cliche but I love them. The brother in this book was the complete opposite, a total jerk. I hated him, and I LOVE that I hated him. I'm sure they're out there but I personally have never read a book where the older brother surpasses being a jerk and is the literal worst (probably over exaggerating a little).
Another I absolutely LOVE is the format of the book. It's told in alternating pattern of before and after's. The after chapters take place with Daughter4254 in prison and the before starts at her mothers death and continues to her getting arrested. And the author has a perfect transition when the before catches up to where the after started. It's absolutely incredible and, again, I've never seen anything like it.
Besides the two character's I've talked about there is a few more. Like Thomas. The only person she has to talk to in prison. He has this accent that, who knows why. my brain couldn't stop making super weird. He's as old as Daughter4254 but for some reason whenever he talked all I could imagine was a guy in his late thirties and sounded a lot like Enzo from The Vampire Diaries, if you have ever seen it. That, however, is entirely my fault considering I've been watching that show for the past two weeks. Once I'm done with the show, hopefully I can return to reading like a normal person. Thomas has to be one of my favorite characters in the book. He came from a small village in the mountains that tried to retain as much art and music as possible without the government finding out. He's sweat and funny and I've fallen in love with this character.
Sadly, the romance was severely lacking. Surprisingly, I didn't even notice until I was sitting here and writing the review. I have very rarely found myself enjoying a book without romance. It just doesn't happen because I love romantic fluff. For me to not even notice the little to no romance shows just how captivated I was with this book. I applaud this author a thousand times over for doing the impossible. Not to say that I don't have an OTP that I wouldn't mind seeing in book 2...
Overall this is a fantastic book and I'm thrilled I got the chance to read it.
********************* 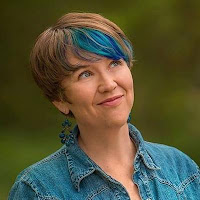 About Leigh:
Leigh Statham was raised in the wilds of rural Idaho but found her heart in New York City. She worked at many interesting jobs before settling in as a mother and writer.

Leigh is currently working on an MFA, has written countless short stories, and is the author of lots of mediocre poetry. She is also the winner of the 2016 Southeast Review Narrative Nonfiction Prize for her short story “The Ditch Bank and the Fenceline.”

Giveaway Details:
1 winner will receive a $25 Amazon Gift Card, US Only.
2 winners will receive a finished copy of DAUGHTER 4254, US only.
A Rafflecopter Giveaway