The Game Can't Love You Back by Karole Cozzo 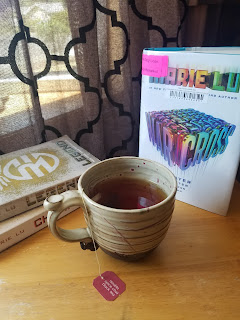 I have to say I was a little wary about this book. Don't get me wrong I love Marie Lu's writing. Legend is one of my favorite book series of all time. But the ending to the series tore me apart. I swore up and down after that book that I'd never read another of her books again. Then Young Elites came out and I said sure why not. It wasn't my favorite book and I never finished the series (although it had nothing to do with the writing and everything to do with lingering resentment for Legend). Then Warcross came out with it's beautiful cover and stunning description and stellar reviews... I couldn't just pass it up! So here I am admitting defeat. Now lets get on with the actual review. Just a forewarning the end of this post will include me ranting about the end of the book so I will be giving a spoiler alert warning before that.

The characterization in this book is amazing. The main character, Emika, is an incredible hacker and technology wiz. Throughout the book she learns what it means to be connected to other people in a way she hasn't experienced since she was eleven. Then you have Hideo, who I have to say is my favorite. He's mysterious, and smart, and charming. His past is littered with secrets and he's definitely a puzzle that needs to be solved. Most of my opinions on Hideo, however, will be in the spoiler section of this post.

I have to say that my favorite part of this book was the technology. It reminds me a lot of the tech Antarctica used in Legend. I have a felling (I can't be sure but) I feel like she took the idea from Legend and worked a whole new plot line around it, which is amazing. I loved this technology when it was in Legend and this book delve into and develops it even further. It's creative and innovative. It's original, and nowadays it's hard to find something that you haven't read a million times.

I could rave about so many other amazing things in this book but the last one I'm going to talk about before rant time is the ending. No spoilers yet. I promise. The end of this book is surprising. It's so unexpected. With how many books I read it's hard to catch me off guard but... wow. This ending threw me for a loop.

Now the moment I've been waiting for.... caution SPOILERS ahead.
I love the conundrum the author presents at the end. The moral dissonance. The huge controversy revolves around Hideo controlling peoples minds to not break the law. There's two sides to this. One, he's keeping people safe. With this tech in place people won't get murdered, or steal, or kidnap children like what happened to Hideo's brother Sasuke. Two, is it wrong to make someones mind up for them? Where do you draw the line between control and protection? While Hideo's intentions are good he could potentially be stripping people of their free will. Although should someones free will mean the death or harm of someone else. Again I love that Marie Lu is facing down this morale conundrum.
And by the way I totally called the Zero is Hideo's brother, Sasuke.

Now that I'm done with my rant I just have to say that I can't wait for the next book in this series. Hopefully this series will end a lot better then Legend. And yes I'M STILL BITTER!
I might be bitter but I wont let it turn me away from a good book.