It's All Fun and Games by Dave Barrett 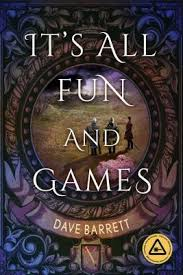 I just want to say a quick thanks to the publisher for allowing me to read this book off of NetGalley.

This was an amazing book.

I have to admit it started a little slow. I'm not into the whole L.A.R.P thing so I was skeptical about reading this book. I started this book three different times. The first 30% of the book was a struggle to get through. The prologue was amazing and really pulled you in but it dropped from like eight to three going from the prologue to the first chapter.
The first 30% was slow and basically was background information that took way to long to get through. When we finally get past the slow beginning things jump fast. The book went from one to ten in three sentences, and while the huge jump was amazing and completely left my head spinning it slowed down again after that. We had this amazing moment where the intensity was really high then a dull moment.
When things finally picked up again it was more climactic and not in an anti-climactic way. Although it was dull at parts it was  good book and I enjoyed reading it. I really hope there is going to be another book.


Now the characters. I really liked the characters. Allison, the main character, was amazing. Even without any training she completely kicked bad guy butt (at least tried to.) The other characters were also pretty cool. Unlike most books with a good number of characters the characters in this book were easy to keep strait, names and powers/abilities. The characters although had very minimal reaction and emotion when they found out what kind of predicament they were in. It would have made sense for at least one of them to break down a little or cry, but they had very minimal emotion through the whole book.

Now, one thing I personally didn't like was the ending. It may be just me but I love cliff hangers in book series and even though the story is obviously not over the ending was, I'm going to use the word again, dull. It was a plain ending. At least with cliff hangers they leave you dying to get your hands on the next book, and I do want the next book, but it's not the same feeling.

Overall, I would defiantly recommend this book for people who can tough it out through slow areas but this defiantly not the type of book for people easily bored or distracted unless you're into L.A.R.P then the beginning would make more sense and be less boring. And even if you aren't into L.A.R.P you might still like this book, like I did, it just takes patience.

This book is now available for purchase as of August 2nd.
Posted by H.E.E. at 2:57 PM No comments: