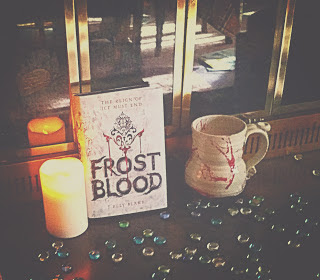 The frost king will burn.

Seventeen-year-old Ruby is a Fireblood who has concealed her powers of heat and flame from the cruel Frostblood ruling class her entire life. But when her mother is killed trying to protect her, and rebel Frostbloods demand her help to overthrow their bloodthirsty king, she agrees to come out of hiding, desperate to have her revenge.

Despite her unpredictable abilities, Ruby trains with the rebels and the infuriating—yet irresistible—Arcus, who seems to think of her as nothing more than a weapon. But before they can take action, Ruby is captured and forced to compete in the king’s tournaments that pit Fireblood prisoners against Frostblood champions. Now she has only one chance to destroy the maniacal ruler who has taken everything from her—and from the icy young man she has come to love.

I love this book! It's well written and has an amazing plotline.
Lets start with characters. First Ruby, a Fireblood with an attitude to match. She's feisty and quick witted. I absolutely adore her. She's such a well developed character as well. It's amazing to watch her develop throughout the book.
Then there is Arcus. A Frostblood who tends to be a little chilly (pun totally intended) and freeze people out. Again, a super well developed character. His change throughout the book is absolutely amazing. Plus, there's a major plot twist when it come to him (no I wont tell you! I don't do spoiler.)
Now it's time with Romantic Plot with Yours Truly. OMG! The romantic plot in this book is to die for! There is so much build up and tension in it that I found myself wanting to scream! (In a good way of course.) The author does an amazing job of balance. It's not romance centered but it has enough to satisfy even me. And the whole Fireblood and Frostblood falling in love thing even though they are supposed to be sworn enemies is fantastic. It's a little cliché but what's a romantic plot without a little bit of cliché things. It's a classic idea and I absolutely adore it. It's a tale as old as time. (If you can't tell I watched Beauty and the Beast recently.)
The plot is fascinating. It's not boring and it's really hard to put down. It kinda seems like a cliché plot but it has it's own unique twist. It actually reminds me a lot of The Last Airbender. So if you like that show/movie this is defiantly the book for you.
Even though this is a pretty cliché book the author puts her own spin on it, making a classic idea her own. I personally love things that seem cliché especially because it makes you think you know what's going to happen and then the author sucker punches you with a plot twist you never saw coming.
I can't wait for the second book because I have to know what happens next. And apparently, according to the description of the second book there's another guy in the picture. The suspense is killing me!
Anyway, this is a fantastic book that I would defiantly recommend.
***
Hey guys, Hope here. I am in desperate need of follows and would greatly appreciate a follow either on Bloglovin or by email (up above). I'm also on Twitter and Instagram under Fangirl_life29.
Let me know what you thing of the new photos. I highly appreciate constructive criticism about any aspect of the blog! Thank you for taking your time to read this!
Love you guys! 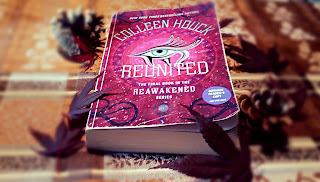 After surviving her otherworldly adventure, Lily wakes up on her nana’s farm having forgotten everything. Her sun prince, her travels to Egypt, and her journey to the Afterlife are all distant memories.

But Lily is not the girl she once was. Her body is now part human, part lion, and part fairy. And if that isn’t bad enough, she must now harness this power of three and become Wasret: a goddess destined to defeat the evil god Seth once and for all.

With the help of her old friend Dr. Hassan, Lily departs on her final voyage through the cosmos and across the plains of Egypt. On the journey, she will transform into the being she is destined to become.

Reunited is the heart-pounding conclusion to the Reawakened series.

It is time for Lily to find her sunset.

On Sale: August 8th 2017
Pre-order: Amazon
Barnes and Noble
Powells
Huge thank you to the publisher, Delacorte Press, for sending me a review copy of this book.
My Review: No rating
The reason that I have no rating for this book is because a five star review isn't enough. This book is absolutely amazing and no review is able to adequately describe how much I love this book. That beng said I will try my hardest to portray it to my best ability.
I have written a review for the fist two books on here so this review will be based primarily on Reunited but I will talk about the other two books and therefore will contain spoilers for the previous books.
One thing I absolutely adore about this book is Lily, the protagonists, memory loss! Now typically I absolutely despise when a character looses their memory. It tend to get cliche really fast and it also get confusing at times. BUT it's the thing I loved most about this story, about Colleen Houck's books in general, is the way the memory loss is played. I can't stand books without romantic plot, they bug me so much, which is one reason I don't like memory loss in books is because there is typically very little romantic plot while the characters memory in gone. That's also why I don't like long separation in books. But Colleen Houck plays in off magnificently. While the main character and her love interest are separated for half the book they still meet in their dreams. Even though Lily doesn't remember Amon she still feels connected to him. Then there's the romantic plot with the other two girls that share Lily's body... Let's just say this book does not lack romantic plot like I feared it would.
Still sticking with the memory loss, I love the way (spoiler) Lily gets her memory back as well. It's not the cliche 'she gets her memory back and she knows who she really loves' kinda thing. She's still conflicted and she has to choose all over again who she really wants.
Okay, I could talk forever about romance and memory but I should probably move on. I really enjoyed how Colleen wrote the three girls and Wasret, the goddess they are supposed to become. It's really hard for me to describe because you really have to read it to understand. The first thing I liked was that each girl gets a voice. The book itself is mainly told through Lily's perspective but when one of the other girls takes control of her body they also (usually) take over the perspective as well. I love this because even though the main protagonist is Lily and everything started with her it's not just about her anymore. It's about these two girls who have given up a lot to help Lily.
The more difficult thing to explain though is Wasret, and I won't even try because spoilers and I don't think I will do an adaquet enough job. I will say that I love how Colleen brings Wasret into the picture. The way it's written is very clear to understand what's going on and it's very nicely described.
The plot line of the whole series, to me, is fascinating. I've always been a sucker for mythology. Ever since I read Percy Jackson all you have to say is that a book has mythology in it and I'm hooked. Though I have found that my favorite mythology books take the gods and make them vulnerable. It personifies them. Give's them human emotion and empathy. I think this book did that splendidly. The gods where shown as beings that could break, that could be destroyed, that could be saved. I think this book has done a better job at that then any other mythology book I've ever read (yes, that includes Percy Jackson.)
Honestly, Colleen Houck is probably my favorite author of all time- tied of course with Alexandra Bracken and Marie Lu (you can't possibly ask me to choose one favorite author!)- and if you haven't read one of her books you need to. I also love that Colleen Houck is a local author for me (I'm Oregon born and raised.)
This is a definite must read this summer!