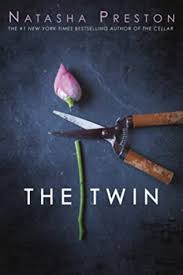 I'm just going to jump right in with this book. First of all notice that I didn't put a rating on it because I still don't know what to think. I legitimately JUST finished this book like ten minutes ago and I'm still processing what I just read.


This is the Goodreads description because I'm too upset to form my own:
Ivy and Iris haven;t lived together for years - when their mother and father divorced, each parent got custody of one twin. But after a tragic accident takes their mom's life, the devastated sisters are reunited, and Iris moves in with Ivy and their dad. Iris takes their mom's death especially hard. She barely talks, spending hours alone in her room. Ivy can't stand to see Iris so sad. She promised Iris that she can share her life now. After all, they're sisters. Twins.

It's a promise that Iris takes seriously. And before long, Ivy's friends, her teachers, and even her boyfriend fall under Iris's spell. Soon Ivy begins to think there's something wrong with her twin. It's almost like Iris is out to get her. Ivy tells herself she's being paranoid. It's not like she's in any danger from her twin...

I think that first off I'd like to say that this book was AMAZING and
despite what tear filled ramblings come out I would definitely recommend.

The first part of this is going to be spoiler free, but I will be sharing my opinion on the end of the book later and will give full warning when we get to that point.

The first thing I want to talk about is characters. I LOVED the characters in this book. Ivy is from the beginning set as a unique character and the fact that she seems to suffer from OCD and potentially some sort of anxiety (maybe?) disorder adds to the believability of the insanity that is her twin, Iris. From the description it shouldn't be surprising that Iris suffers some major form of mental issue. My best guess would be sociopathy though I'm not a psychologist so I couldn't say for certain. Maybe somewhere far up on the psychopathy scale but she doesn't show all twenty signs of being a psychopath. Some people are more susceptible to developing mental illness and having a close family member, not to mention a twin, that suffers from one increases the chance of having one as well even if it's a different mental health issue.

I read some reviews of the book after finishing it because I wanted to know what other people thought of the ending. One review made me think a bit about the characters and if they were fully developed or not. And I have to say that some of the characters did fall a bit short. Ivy's friends Haley and Sophie did seem a little two dimensional. But reading it I could care less because the book was still enthralling. I was so wrapped up in Ivy's emotions that I didn't care whether a background character, who I don't even like to be completely honest, was a little flat. I think the time and energy went into making sure you felt just how frustrated and upset Ivy was and that you felt upset for her, and that was time well spent.

I think my favorite character would have to be Ty. I mean can I just say best boyfriend ever!?! He sticks by her and... I'll get back to him later. Don't want to spoil anything.

While the whole evil twin and good twin plot is kind of overdone I thought this was a fresh take on it. I figured the whole idea had been exhausted but this book shattered that crazy notion I had. The author totally takes a known plot line and twists it and makes it her own. I was captivated from the start to the very end.

Now we get to the fun part.
Spoilers!!!!

Okay that ending totally messed me up. For those of you reading who didn't read the book, shame on you (But not really because I would do the exact same thing) here is a brief overview. Ivy, the good one, finally gets Iris to confess to killing their mom and Iris's old best friend. Ivy then gets into a fight with her dad over something Iris again framed her for and ends up spilling everything. Her dad proceeds to believe her sister, which BY THE WAY he has only really known for two months over her and she gets locked up in a mental hospital. Iris goes and visits her and tells her that if she gets out and accuses Iris of muder Iris will pin all the blame on her. BAM, end of book.

I was legitimately crying at the end I was so mad. At first I hated the book for the ending so much but logically I have to admit that if the book wasn't good I wouldn't have been feeling that kind of emotion but AHHHHHHHH.

I want to go back to Ivy's boyfriend Ty because I kind of left that hanging. At the end of the book Iris tells Ivy thet Ty hates her now and blah blah blah. But I don't believe it. Maybe this is me trying to regain control but Ty was the ONLY person to stick by her side when everyone else turned against her. Ivy told Ty that Iris was the one who killed their mom and Kat, Iris's old friend, and he didn't think she was crazy. He forgave Ivy after a picture came out with her kissing his friend.  He was super uncomfortable around Iris and wasn't taken in by her charm like everyone else. I think Iris was just being a witch, I want to use a stronger word but I will refrain, and lying.

There, boyfriend rant over.

I have to admit that I was left totally unsatisfied by this ending but I did LOVE it as well. I think it would be a great ending for a book with a sequel. Oh my gosh I want a sequel. Not just because I want a happy ending but I want closure. If Iris kills Ivy, fine! At least it's closure. I mean please no, but still this doesn't feel like an ending.


Posted by Hope Edwards at 9:45 PM No comments:

Social Distancing Book 1: Even If I Fall

Spring term is well under way and as most of you know we are all stuck in side... I have gotten so bored these past few weeks that I'm making a goal to read as many books as possible.
I've started with Even If I Fall by Abigail Johnson. It's been on my to-read list for awhile and now that I've found myself with too much time on my hands it was the first book I singled out. It turned out to be an excellent choice. 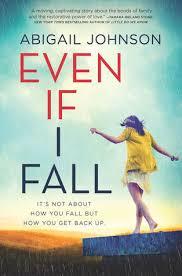 Even If I Fall by Abigail Johnson
Rating: 9 out of 10

Even If I Fall is a beautifully sad book that is very thought provoking and completely different than anything I've ever read. The main character Brooke and her family have had their whole lifes turned around since her brother Jason confessed to killing his best friend Cal. Her sister has become reclusive, her dad never leaves his shop, her mom is trying to act like everythings fine, everyone either keeps their family at a distance or treats them like trash, and she just needs someone to talk to. Her only friend is new to town and has never heard of Calvin or Jason, and Brooke would like to keep it that way.
Her only outlet is ice skating. And then a broken down truck and a storm changed that. When she offers to give Calvins younger brother Heath a ride she accidentally starts a series of secret meetings. They open up to each other in a way that they haven't been able to with anyone else. But Brooke is still desparate to find out what happened the night of Calvins murder and with her growing relationship with Heath things are bound to get complicated.
I could not put this book down. First off, the characters were very well written. The author really connects the reader with Brooke. You can feel every frustration and pain that she is going through even though you haven't gone through what she is going through. And not only that but I actually liked her brother too. It's hard to understand how someone can love a murderer until you actually look through their eyes. The author does a magnificant job showing how hard it is for Brooke to reconcile the loving brother she knows with the murder he comitted, and how she still loves him despite what happened.
Heath is also a very vivid character. Even though the story isn't told from his point of view you can still see the inner struggle he's going through. The guilt he feels that he's interacting with the sister of his brother's killer and the anger he feels but the undeniable bond that's forming between them despite that. I have to say that I very much felt like yelling at him a couple of times and then felt guilty because he's going through his own stuff too. I would've liked to see things from his side a little bit and think it would've been interesting if it had been written from alternating points of view. I felt myself taking Brookes side a lot through the book and it would've been nice to see his daily struggles like we see hers.
And Brooke's best friend Maggie. OH MY GOSH. I totally love her. She has such a bubbly and vibrant personality and always tells you like it is. You also get to see a soft side to her and her insecurities as well. It's a good reminder that no matter how put together a person seems, we are all struggling with something.
The plot line is something I've never seen before. These days every book seems to be a remake of another book. Take Percy Jackson and Harry Potter for instance. Both incredibly good books but if you look at the books and start picking out similarities you'll find that they have a lot in common. (Honestly more than I'm comfortable with.) This book has to be the most original thing that I've read in a very long time. There is not another book like this, at least not that I can tell, and I'm absolutely in love with it. Not only is it original but so thought provoking. It really makes you think about things we tend to ignore.
If you are looking for a book that is going to make you laugh, cry, tear your heart apart and put it back together again, then this is definitely a must read. The things you will learn and start thinking about from this book are so so so (x100) important.
Thank you Abigail Johnson for writing this book.

Posted by Hope Edwards at 5:25 PM No comments: