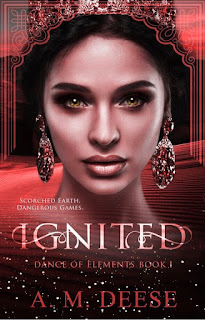 A NOBLE DAUGHTER.
A FORMER SLAVE.
SCORCHED EARTH AND DANGEROUS GAMES.
“Jura imagined it sounded like rain.”
Juggling death is nothing new for seventeen-year-old Jura, daughter of the First of the Thirteen, successive rulers of the Republic of the Sand Sea. However, when a blood chain ensnares her father, she is thrust into the seat of power and forced to rule her elders.
“To Tylak, water had never tasted sweeter.”
Jura must track down her father’s assassin and balance a country on the verge of collapse. To find the Prince of Shadows and uncover the truth, Jura puts her trust in Tylak, a former slave accused of stealing from the Everflame—a man she once condemned to death.
In a world where water is currency and enemies lurk around every corner, Jura will use her wits or risk igniting a world war.

I loved this book so much! What first caught my eye was the cover. I know they say you shouldn't judge a book by it's cover but it doesn't hurt to have a stunning cover. The other thing that made me want to read this book is the summary. It's so intriguing. I've always loved stories of the high-class girl and the peasant boy. Especially when they start off absolutely hating each other.
The format of the book is a little interesting. The point of view switches between five characters. At first it was slightly confusing but it was amazing to see these five, seemingly unconnected, stories come together. It's not something I personally would have done but Deese pulls it off without a hitch.
I love the characters in this story. The main character is Jura, who is mentioned in the summary. Defiantly a strong female character who knows how to get what she wants.
Next, there's Tylak, also mentioned above. Not to choose favorites or anything...but Tylaks my favorite. He's smart, clever, and brave. He also knows how to get what he wants but he goes about it differently then Jura.
Thirdly, we have Ash, a retired gladiator. I have to be honest I hated him at first. He grew on me throughout the book.
Then we have Beshar. Have to admit, he's my least favorite character. He's cunning and deceitful. He like's to hold his power over others.
Last but defiantly not least, a little girl named Kay. She's seven years old and the daughter of a Dragon Breeder. Yes there are dragons in this book and yes it is awesome.  She's strong willed and strong tempered, but adorable as well. She is very obedient to her parents but only when it suits her.
Overall this is an amazing book and I can't wait for the next one. Defiantly recommend for anyone who loves fantasy. And if you read The Winner's Curse trilogy and loved it (I did too) then you will love this book. 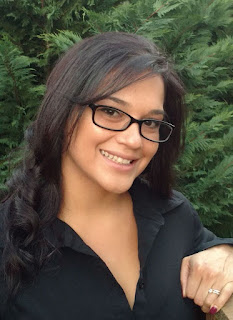 About the author:  Alexis Marrero Deese is an avid reader of young adult and fantasy. Her favorite authors include Brandon Sanderson, Jaqueline Carey, and Orson Scott Card. She graduated from the University of South Florida with a Bachelor’s Degree in Creative Writing and a sun tan she misses dearly since her move to northern Georgia. She has a passion for cooking, spends entirely too much time on Pinterest, and is a self-proclaimed dog training expert to her family’s legion of dogs.

Giveaway Details:
Win one signed paperback of Ignited by A.M. Deese, one glow-in-the-dark dragon pendant, one leather-bound dragon journal, and a $5 Amazon gift card! This is a pre-order giveaway but you do not need to buy the book to enter, buying the book just gives you more entries.
Giveaway Link:
https://gleam.io/TbBiM/ignited-preorder-giveaway

Posted by Hope Edwards at 6:00 AM No comments: