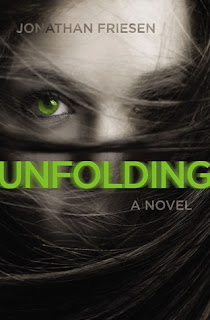 Summery: Jonah wishes he could get the girl, but he’s an outcast and she’s the most perfect girl he knows.

And their futures seemed destined to fork apart: Jonah’s physical condition is debilitating, and epileptic seizures fill his life with frustration. Whereas Stormi is seemingly carefree, and navigates life by sensing things before they happen. And her most recent premonition is urging her to leave town.

When Stormi begs Jonah for help, he finds himself swept into a dark mystery his small town has been keeping for years. And the answers Stormi needs about her own past could possibly destroy everything Jonah has ever known—including his growing relationship with Stormi herself.

My review: Thank you to NetGalley and the publisher for this eARC.

I really enjoyed this book. The biggest thing for me though was that the beginning was really hard to understand. When the main character, Jonah, would have flashbacks it was really confusing when they started and when they ended. I almost didn't finish the book because I was so confused. I'm glad I did because it got easier to understand the more into the book I got.

Of course the entire book was confusing but in a good way. Things really came together at the end. It's one of those books where you're getting pieces of the puzzle but nothing connects until the end. And what a twist ending!

I really liked the characters. Especially the main protagonist, Jonah. Jonah suffers from scoliosis and epilepsy. Throughout the book he has many seizures and he's constancy teased because of them and his curved spine. His mom loves him so much but his dad seems to hate him. He calls himself a monster several times throughout the book. Basically he's a character that breaks your heart.

Then there's Stormie. I can't really figure her out. I love her but she's not as well developed as I would've liked. And defiantly not as developed as Jonah.

I did however feel like the book moved at a fast pace. It seemed to be one thing after another, a never ending slew of things. I didn't "connect to the book" like I usually do with books. And the ending left off at such a cliffhanger! I would totally read a second book but I don't know what the author would write the second book on... and if he's not writing another book an epilog would've been nice.

But I have my fingers crossed for a second book. Even though I had problems with the book I'm still intrigued.
Posted by H.E.E. at 6:43 PM No comments:

Toward a Secret Sky by Heather Maclean

Hey! I know it's been forever. All my books right now are on my phone and I'm not allowed to read from my phone during class :'( but it's the weekend so I got to actually read! 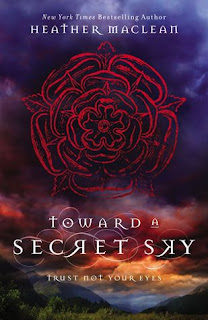 Rating: 3.5 out of 5
Summary: Shortly after 17-year-old Maren Hamilton is orphaned and sent to live with grandparents she’s never met in Scotland, she receives an encrypted journal from her dead mother that makes her and everyone around her a target. It confirms that her parents were employed by a secret, international organization that’s now intent on recruiting her. As Maren works to unravel the clues left behind by her mother, a murderous madness sweeps through the local population, terrorizing her small town. Maren must decide if she’ll continue her parents’ fight or stay behind to save her friends.


With the help of Gavin, an otherworldly mercenary she’s not supposed to fall in love with, and Graham, a charming aristocrat who is entranced with her, Maren races against the clock and around the country from palatial estates with twisted labyrinths to famous cathedrals with booby-trapped subterranean crypts to stay ahead of the enemy and find a cure. Along the way, she discovers the great truth of love: that laying down your life for another isn’t as hard as watching them sacrifice everything for you.

My review: First off a quick thank you to NetGalley and the publisher for giving me this ARC.
This book caught my attention because of its beautiful an stunning cover. I love it so much. The summary sounded really intriguing because I'm such a sucker for a good romance.

This book is amazing. It has a great plot and amazing characters. I absolutely adore the authors take on demons and angels.

So we have our main protagonist, Maren. She's strong and brave, basically your average female protagonist. What I love about her though is that she has a "guardian." A guy that saves her. That may sound weird but let me explain. Most of the books being published now a days are with a female protagonist that saves herself and practically everyone else as well. And that's great and all, I'm a strong believer that we shouldn't be put down because we're female, but I really do like books where the female gets rescued by her love. Especially because the guy saving her is an angel and angels are the only one's that can kill demons (so at least there's a good excuse as to why the boy saves the girl.)

Then there's Gavin. He has to be one of my favorite characters.  He's strong and determined. He seems like a jerk at the beginning but there is a good reason behind it!

There ware two things that I didn't really like about it. The first is that it's so sappy. I love romance, I can't stand a book without it. Throughout the book I found myself squealing giddily (which is a good thing for me.) But I also found myself cringing from how over dramatic some things were. I can't give an example because spoilers suck but this is defiantly a book for people who love romance and not a book for people who don't.

The second thing is that something's seemed forced. It might've been me but something's didn't seem like they flowed naturally.

I love the cliff hanger though and I'm really hoping there's going to be a second book.